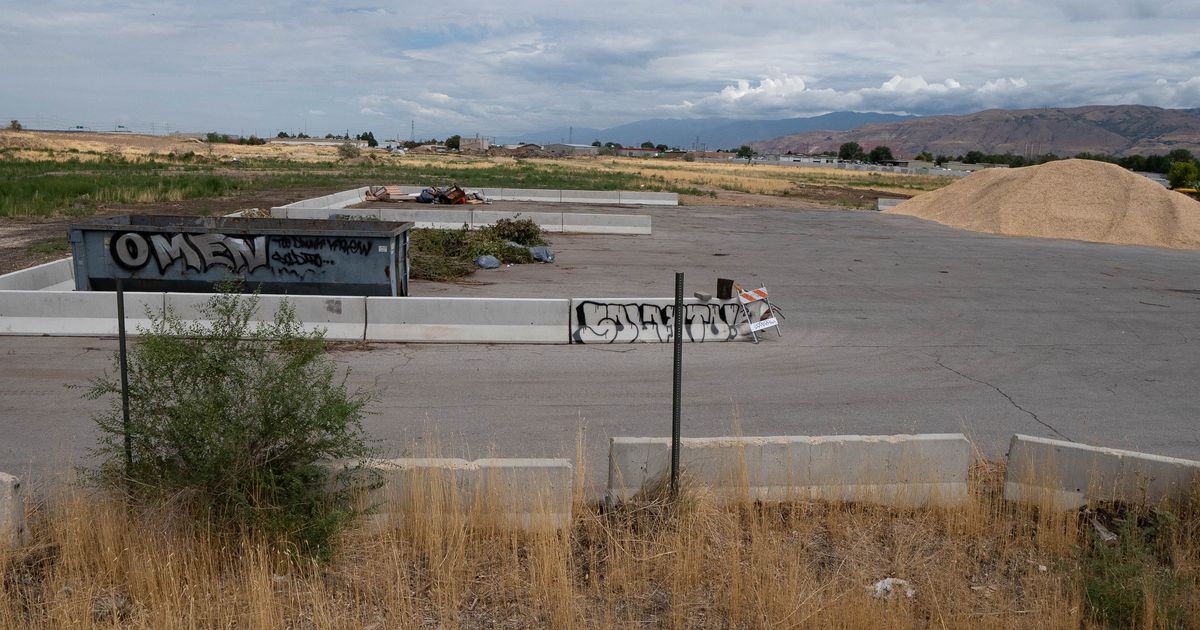 One big potential snag to The Other Side Village: The property near Redwood Road sits above an old landfill.

(Francisco Kjolseth | The Salt Lake Tribune) Salt Lake City is considering selling or leasing a large parcel it owns at 1850 W. Indiana Ave. to The Other Side Academy for a tiny-home village that serves people experiencing homelessness.

The dream of a tiny-house village serving Utah’s chronically homeless moved one step closer to fruition as The Other Side Academy honed in on a large tract on the west side where it plans to build the project.

The parcel, located at 1850 W. Indiana Ave., is currently undeveloped and owned by Salt Lake City.

Academy board chair Joseph Grenny listed all the characteristics that make the property ideal — from its proximity to downtown Salt Lake City to its access to public transit on Redwood Road.

“The most appealing feature is it’s 45 acres,” Grenny said, who had initially wanted at least 30 acres. “That gives us the chance to invent the world.”

The property does have at least one unappealing feature: It sits atop a portion of the old Redwood Road dump, Salt Lake City’s primary landfill from 1923 to 1962, according to information from the Utah Department of Environmental Quality.

A 2017 DEQ report found elevated levels of metals like lead, copper, mercury and nickel at the site, as well as hydrocarbons, but noted “there is no on-site population or residences” and recommended no further action.

Grenny said The Other Side Academy hired a third-party consultant to review previous studies of the former landfill and to conduct its own sampling.

“We were very aggressive in environmental testing,” Grenny said.

Only a portion of the parcel being eyed includes the former dump, he said, and that part would be developed with gardens and green space, not housing.

“We will be able to reclaim it with planting,” Grenny said, ”and restore it to a much more beautiful place.”

The ground beneath landfills can be unstable as garbage decomposes, releasing flammable gases and sometimes dangerous garbage juice. But redeveloping the sites — even into housing projects — isn’t unheard of. In Santa Clara, Calif., developers are turning a 240-acre landfill into a massive mixed-use community with 3 million square feet of retail, residential and hotel space.

The Other Side Academy, which runs a live-in vocational training program, is seeking to rezone the former Redwood Road dump property so it can build The Other Side Village. The academy’s soon-to-be-released master plan calls for 440 tiny houses. It would also include supporting businesses that provide jobs for residents and services for the wider community, like a deli and performing arts center. The village would provide health, dental and social services for its residents as well.

“The concept here is to build a dynamic, vibrant community,” Grenny said, “not just solve a homeless problem.”

The city will initiate a public input and engagement process about the project in the coming weeks. The city will likely either lease or donate the land if the project is approved by the Planning Commission and City Council.

“It’s exciting to see The Other Side Village moving along in this process, which we hope will have an important, long-lasting impact on the chronically unsheltered segment of the homeless population, in particular, people for whom resource centers have not been a solution,” Salt Lake City Mayor Erin Mendenhall said in a news release Friday.

Asked about the former landfill at the property, the mayor’s office referred The Salt Lake Tribune to The Other Side Academy to ask about its evaluation process.